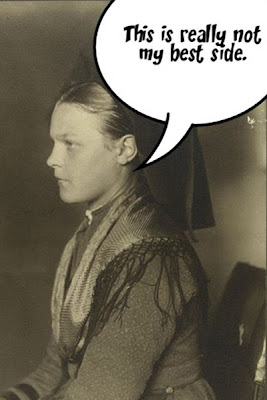 I've never considered myself photogenic. If I smile naturally my mouth is too wide and my eyes turn into slits. One eye is a tiny bit smaller than the other...nothing you would notice except in pictures it becomes a giant flaw. (at least to me it is)

Just knowing this about myself makes me flinch whenever anyone says cheese. Over the years I've learned to keep my mouth closed when having my photo made. A Mona Lisa like smile is oh-so-much-better than having eye slits.

I found this tip for overcoming that tense feeling of impending doom when you know the photo that is about to be taken is going to make you look unattractive.

Learn how to change your state No, I don’t mean if you live in Idaho you need to move to Oregon. Changing state means going from level 1 to level 5, or in other words, instead of looking like you were caught off guard, you look natural and like you are enjoying yourself.

Models are taught to change state by developing a “trigger.” So when they are about to have their picture taken, even if they are in a crummy mood, they can go from level 1 to level 5 in a heart beat. Firing a trigger is a reminder to do the things that make you look good. Believe it or not, THE most successful trigger we found over the years was called the “rear cheek squeeze.” It’s really cool because it’s inconspicuous. Yes, it’s exactly what it sounds like; you squeeze the cheeks of your rear end together. Don’t make fun of it until you try it. To see it’s effectiveness try this experiment. Ask someone to sit on a chair and then ask them to squeeze their cheeks together. I have not met ONE person who doesn’t immediately smile and say something like, okay, now what?

So what about you? Do you like yourself in photos or do you try to hide behind everyone else, hold your head way too high in order to get rid of that double chin and never smile for fear of showing your gums or eye slits? I for one gave up avoiding having my photo made a few years ago when I realized that there were hardly any pictures of me taken throughout my 20s, 30, and part of my 40s. How dumb of me...I'll never look as good again, eye slits or not. Anyway, my children should have a photo or two to show their grandchildren one day.

So....in the future let's all say squeeze instead of cheese and we might just find we've become photogenic!
Posted by steviewren at 5:48 PM