More of Our Week

A trip to the Splash Park. 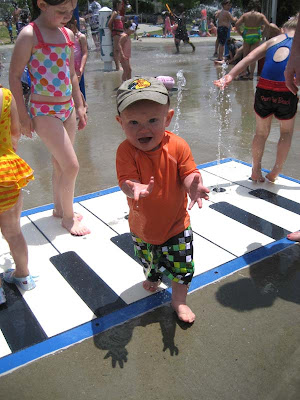 Whoever is the inventor of Splash Parks is a genius! The place was full of mom's and kids. From the smallest to the largest, everyone was having the best time. 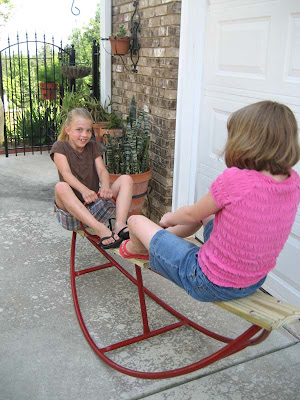 My Daddy refurbished this seesaw. The girls loved it. Elijah did too.
A trip to the skate rink. 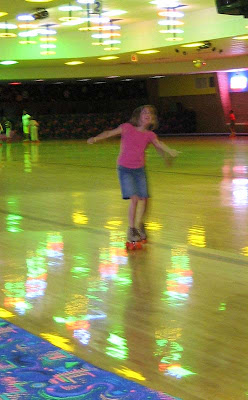 The girls other grandparents treated us to a night at the local roller rink. Their cousin makes skating look like a piece of cake. Elizabeth was determined to master it and she did by the end of the night. Madeline did a good job too. Sorry for the blurry picture. My camera wasn't made for low light.

Tomorrow, a trip to Texas.

Enjoying Being a Gramma

Texas mommy and daddy and 2 sisters went home last Sunday, but 2 big sisters decided to stay with me a little longer. 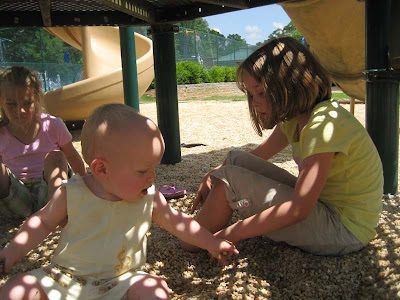 Today we met Elijah at the park for some fun. 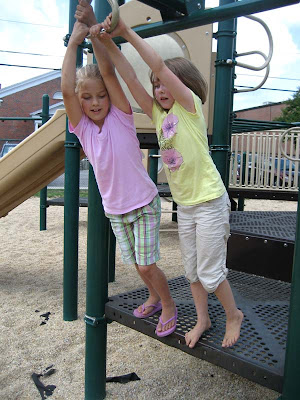 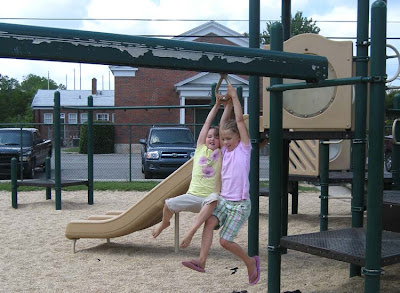 The fun continued at home with a tumbling ramp made of baby bed mattresses and every pillow in the house. 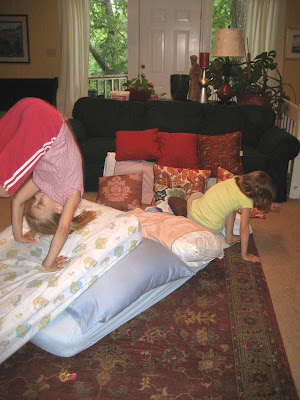 I will be driving them home this weekend. Can you say "Road Trip?"

Rachel emailed me this picture of Elijah playing in the sprinkler. 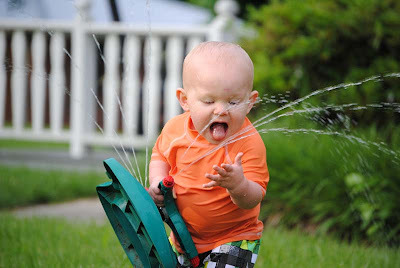 Beauty School is in Session 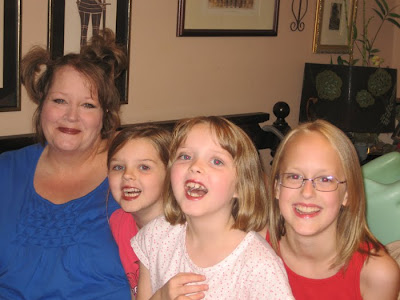 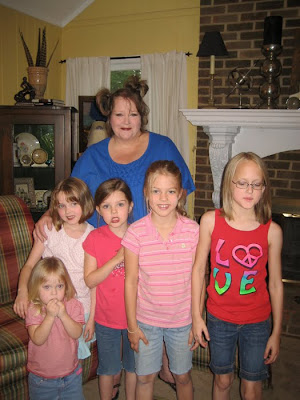 Free makeovers available.
You can have a have a hair do like mine if you drop by.
Posted by steviewren at 11:49 AM 18 comments: 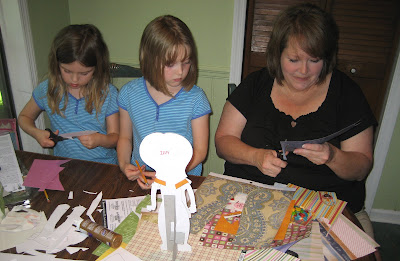 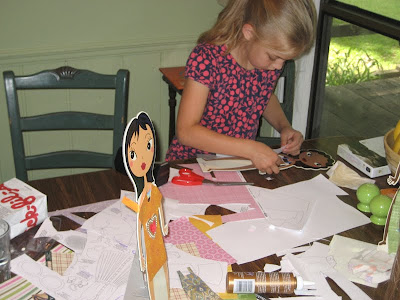 The Day I Knew I Was a Grownup 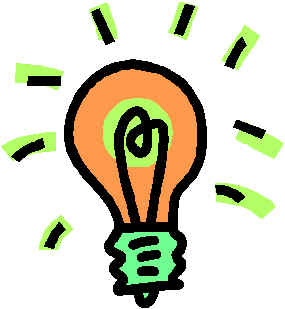 ...was the day I realized that I had a 14 year old son that I had to figure out how to make obey me.

Of course, I had been making him mind me since he was a toddler...but on this particular day he needed discipline that I felt was out of my realm of know how. He was as big as me. He had gotten in trouble on the school bus. I didn't know what to do to ensure he wouldn't do the same thing again.

It was a flashbulb moment of life. I remembered being 14 myself as if it had only been the week before. How could I get a 14 year old to do as I said? So, I did the only thing I could think of doing. I fervently asked God for help and wisdom. And shortly thereafter I had an idea that was totally not me.

After telling the bus driver what I planned on doing, I told my son that if he couldn't ride the bus and police his own behavior his mommy would have to ride the bus with him in order to make him behave. I was completely prepared to do it, but oh how I hoped I wouldn't be forced to follow up. I would have been just as humiliated as my son. But, I wasn't about to let him know that.

Well, we had other clashes through the years, but never one regarding proper behavior on the school bus. A few years ago I mentioned the incident. He said he was going to run away if I'd ever tried riding the bus with him...I retorted that I'd noticed he'd never gotten in trouble on the bus again.

He has children that will be 14 before too many more years pass. I hope he'll remember to pray when he doesn't know what to do with them.
Posted by steviewren at 12:37 PM 13 comments: 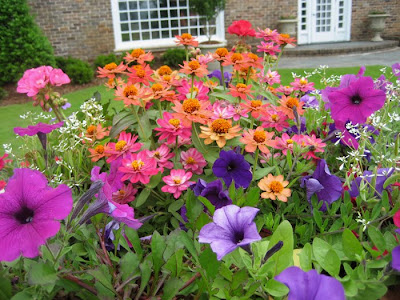 I think the color combination of these flowers is unexpectedly appealing. I hope my next job is the same.

Sorry I've been absent from the virtual world. I've been feeling quiet this week. I'm sure I'll find my voice soon.
Posted by steviewren at 11:37 PM 18 comments: 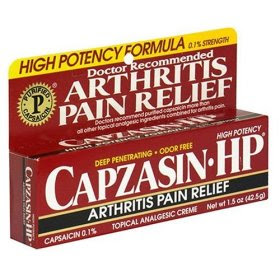 I used this stuff today because capsaicin is supposed to be an effective help with arthritis pain. Anybody ever tried this? It is made from hot peppers. The insert sheet says don't go out in the sun. Let me tell you, don't go out and mow the yard in long pants hours after you've applied it, even if the sun isn't shining...and especially don't come in a take a lukewarm shower. OMGosh, my legs have been burning for over an hour. The sensation is just beginning to subside. The instructions say the burning will go away after a few days. I guess your skin becomes acclimated to it....I'm not sure if I'll last that long.
Posted by steviewren at 7:08 PM 12 comments: 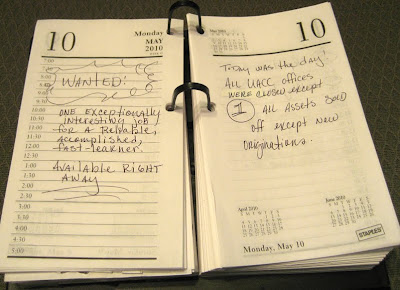 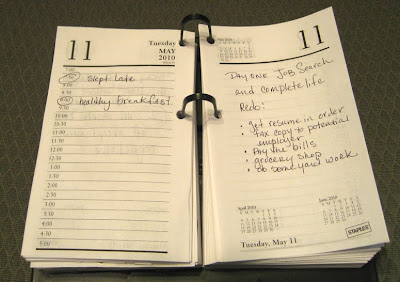 We weren't surprised to get the visit from Corporate, but we were surprised to find that it was almost the whole company that was getting the pink slip. I've been preparing for this day and if truth be told...looking forward to it. I hope I never have to take another job as a bill collector. It's not for me. I've got tons of projects I want to achieve around the house, so my immediate job is to make sure that I am as productive (not really my natural state of being) as I can be in this interlude. I plan to write the things I want to accomplish for the day on my calendar to reinforce accountability. Maybe I'll draw a couple of faces for it as well.

Oh yeah, better not forget to apply for unemployment!
Posted by steviewren at 10:40 AM 17 comments: 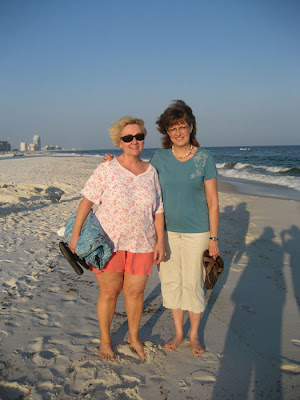 first night on the beach for the four of us 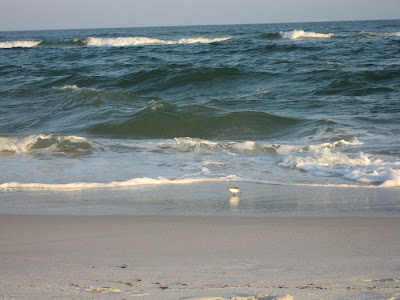 the water was nice...no signs of oil from the giant oil spill (yet?) 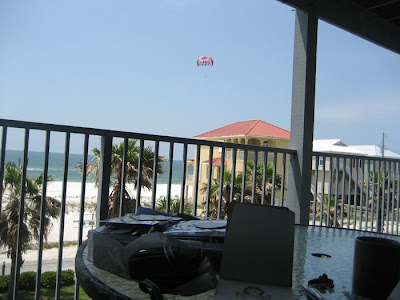 the view from my workstation on the balcony...I'm not much of a lying on the beach kind of girl...I was content to swim in the pool, watch the water, the birds and the para-sailors from the balcony while working on scrap-booking...something I almost never get to do at home 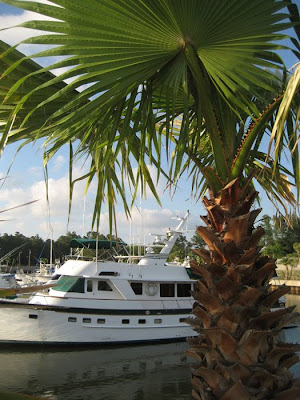 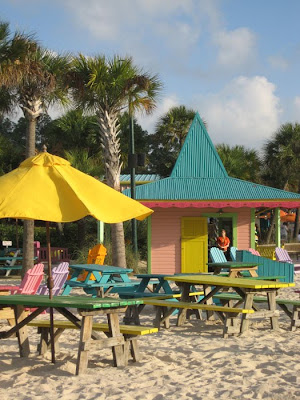 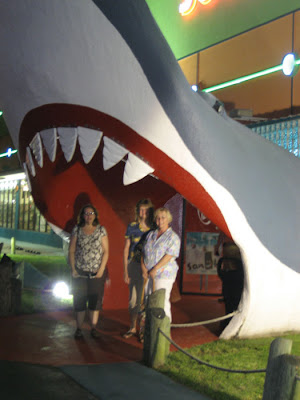 no trip to the beach is complete without a stop at Souvenir City
to purchase some shells and T-shirts...enter through the shark's mouth 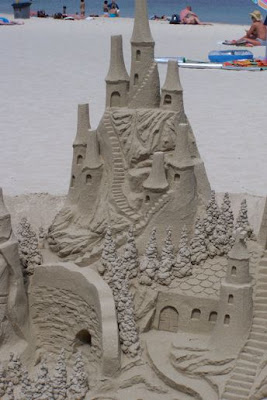 A vacation is having nothing to do and all day to do it. ~Robert Orben
Posted by steviewren at 12:00 AM 17 comments:

Feeling achy today. I will be so happy when the weather drys out some. The sun is shining outside now so maybe when I go out for lunch I won't feel as if I stepped into a sauna.

It was so humid Saturday...I used the flat iron on my hair and the thick, suffocating, smothering, damp, hot, windless, horribly debilitating humidity made it curl more than I've seen it in years. Man, I'm talking big hair.... hair the size of a state!

I hate high humidity...it seems infinitely hotter on a humid day than any other. I am the embodiment of that old saying "it's not the heat, it's the humidity." This is because humidity makes the temperature feel warmer than it actually is, since the cooling effect of evaporation from the skin is not as effective.

Here's the scientific explanation for those of you who have never been fortunate enough to experience REAL humidity.

This is because as environmental temperatures approach normal skin temperature, cooling of the body becomes more difficult. If the atmosphere is as warm as or warmer than the skin, blood body surface cannot lose its heat. Under these conditions, the heart continues to pump blood to the body surface, the sweat glands pour liquids containing electrolytes onto the surface of the skin and the evaporation of the sweat becomes the principal effective means of maintaining a constant body temperature. Sweating does not cool the body unless the moisture skin by evaporation. Under conditions of high humidity, the evaporation of sweat from the skin is decreased and the body's efforts to maintain an acceptable body blood going to the external surface of the body, relatively less goes to the active muscles, the brain, and other internal organs; physical strength declines; and fatigue occurs sooner than it would otherwise. Alertness and mental capacity also may be affected

I got up early Saturday morning to meet my sister, cousin and aunt at the 2010 Decorator ShowHouse, the Longleaf Estate. This was Richard Scrushy's former home...you may remember Scrushy, he was found guilty of cooking the books for the corporation he started, HealthSouth Corporation. Anyhoo.....the house was so big there were three staircases and someone told me there were 16 bathrooms....I'm not sure it that was right, but the master his and hers closets were so large it was obscene. Photos were not allowed inside. Too bad, you would love seeing some of the rooms.

I'll be taking most of the week off from blogging. Wednesday, I'm going to Gulf Shores for a relaxing girls trip. We may just be watching the oil roll onto the beach, so I'm not sure how pretty it will be. There is always the pool though. We're taking DVDs, cards, and bags of crafty stuff just in case.

I may or may not be back tomorrow with a Magpie. If not, I'll leave you with this thought....all Southern mothers say this to their children when they are going to be away from home...."Ya'll be sweet while I'm gone."
Posted by steviewren at 9:37 AM 13 comments: