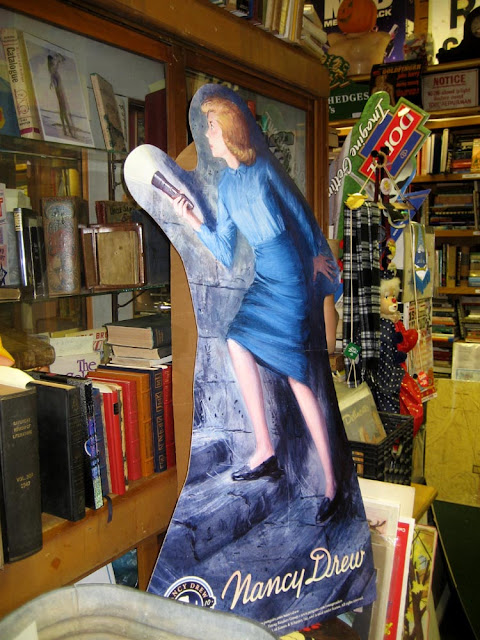 I think everyone recognized my favorite intrepid girl sleuth, Nancy Drew!
Nancy first appeared in 1930.  Her creator was Edward Stratemeyer, who was the founded of the Stratemeyer Syndicate. He created The Hardy Boys series in 1926. Drew's character was conceived to capitalize on girls interest in the Hardy boys adventures and mystery stories. The books were an immediate success.
Wikipedia states, "A cultural icon, Nancy Drew has been cited as a formative influence by a number of prominent women, from Supreme Court Justices Sandra Day O'Conner and Sonia Sotomayor to Secretary of State Hillary Rodham Clinton and former First Lady Laura Bush."
Did you know that over the years, both men and women have written these mystery stories? Mildred Wirt Benson and Harriet Adams, Stratemeyer's daughter, are credited as being the primary writers of the series. All the writers who wrote under the pseudonym, Carolyn Keene, have my dying appreciation for instilling in me a life long love of reading.
Posted by steviewren at 10:47 PM