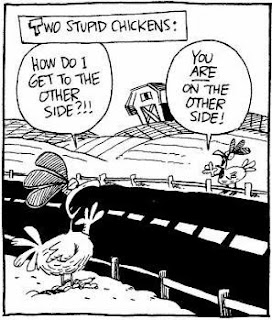 Witzelsucht, that's the name German scientists have given to a dysfunction that causes some people to compulsively tell bad jokes or corny puns, as well as indulging in just plain silly behavior.  Supposedly, it is caused by an injury to the right frontal lobe and could be caused by trauma, stroke, infection or tumor.  My question is, what about people who have always been that way...is that a result of an injury at birth?

My ex has no sense of what constitutes a good joke vs. a bad one or even when a joke should be told and when it shouldn't. Example: He is a huge Alabama football fan. Rachel's in-laws are huge Auburn fans.  While we were all in the hospital waiting room eagerly awaiting our first opportunity to meet Emma, the ex told numerous Cam Newton jokes to the in-laws.

(for those of you who do not live in Alabama and therefore may not have a clue as to what I'm talking about...Newton is Auburn's star quarterback. His name is being tossed around for the Heisman. There is also talk going around that his father campaigned improperly for cash incentives for his son to choose Auburn to play for..which would result in him being ineligible to play....so see not a great topic to joke about with an Auburn fan...which I also happen to be...)

Back to the topic of brain anomalies....I put my name on the waiting list at the library this morning to get the new Oliver Sacks book, The Mind's Eye and also to have his autobiography, Uncle Tungsten: Memories of a Chemical Boyhood, sent over from another local library.  Sacks' neurological research has been a topic of fascination for me for a long time. I just hope my myelin sheath is in good enough condition and the synapses fire fast enough for me to understand more than every third word of what he writes.

For those of you who are unfamiliar with the name Oliver Sacks, the 1990 movie Awakenings, staring Robin Williams, was based on Sacks 1973 memoir of the same name.  The story is of his discovery of the effects of the drug L-dopa on catatonic patients who survived the 1917-1928 epidemic of encephalitis lethargica.

The human brain is a remarkable thing....when it works correctly and even when it doesn't. But, fascinating or not....I will never think the ex's jokes are funny.  Thank goodness I don't have to listen to them very often anymore!
Posted by steviewren at 12:56 PM