It's A Pirates Life For Me! 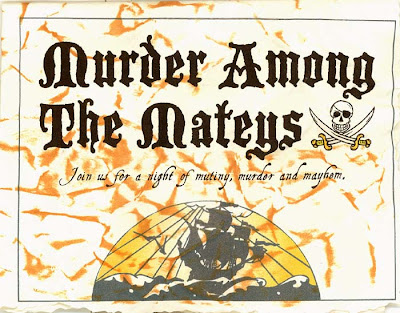 "Ahoy there, Matey! After a voyage filled with pillaging and plundering, The Jaded Jewel--a pirate ship captained by Redbeard, an old but dangerous pirate--is docked in a cove near Port Royal. As the pirates head into town to celebrate their homecoming and spend their gold and goods, a night of turmoil and trouble is sure to transpire." 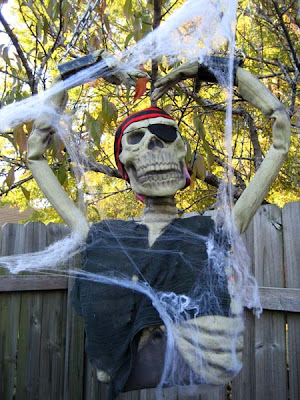 The late brother of Cap'n Redbeard, Toothless Willie.
Don't be frightened!
And so the party begins.

Better familiarize yourself with the Pirate's Code of ethics (isn't that an oxymoron). You will certainly need to know your rights before this night is done! 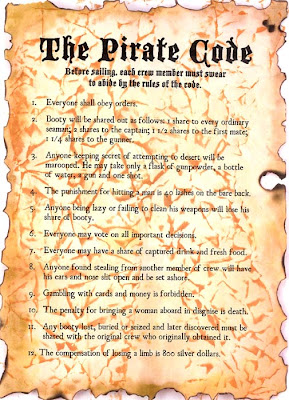 Do you recognize this scallywag standing next to Jolly Roger? 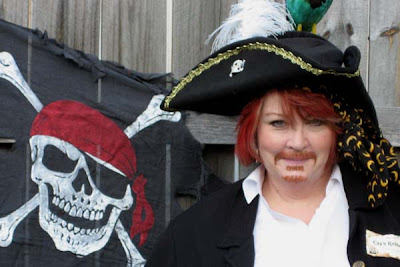 It's Cap'n Redbeard himself! He's a fierce, but fair pirate, who runs a tight ship
and won't have anyone overthrowing it!

It's time to meet some of the scurvy crew of characters that attended the party. 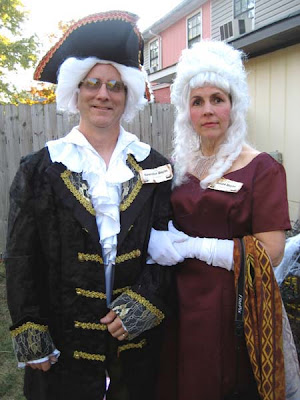 Governor of Port Royal-Governor Napier and his wife Juliana. The governor's job is
to keep this town safe at all costs, but his fair lady Juliana is tired of living in terror.
She is ready to take matters into her own hands if need be. 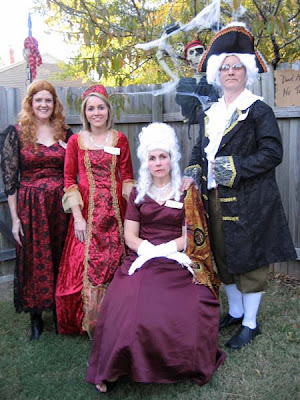 The governor's family portrait. Shiver me timbers, don't they make a fine bunch! 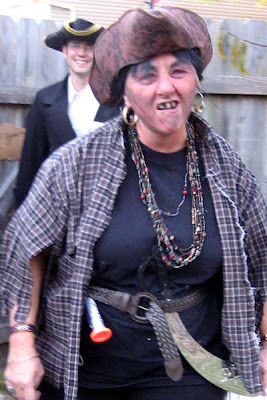 Here is Cutthroat McPhearson, the scourge of the Caribbean. There is a rumor out that
Cutthroat is scheming to incite a mutiny before the night is over. 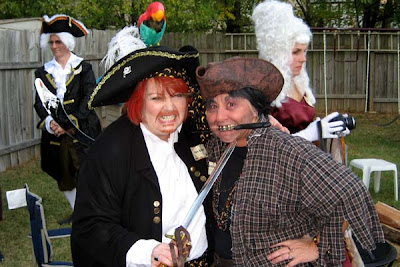 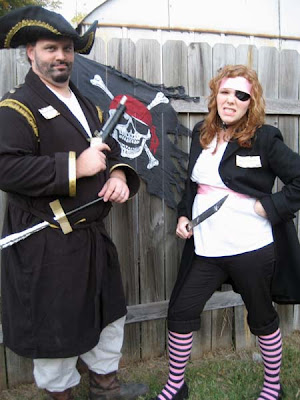 One Eyed Wanda(otherwise known as my daughter) and
her henchman, Buccaneer Bradshaw (my son-in-law). 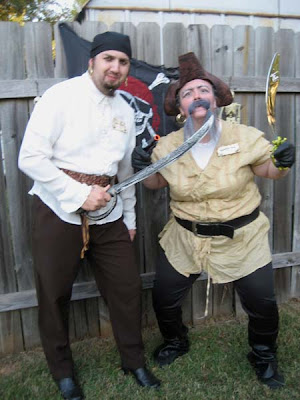 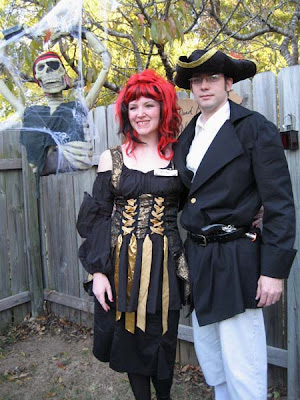 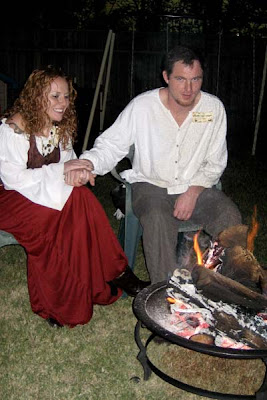 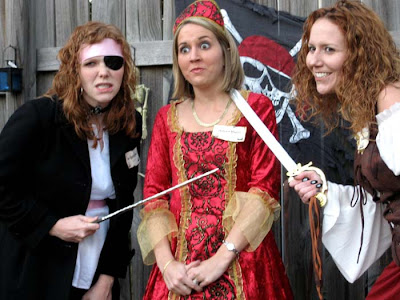 
Everyone sits down to a night of feasting and revelry. But beware the innocent talk and sly smiles of your dinner partners, danger is afoot! 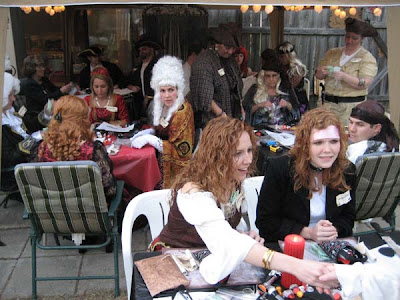 As The night quickly steers out of control one guest meets a tragic demise and ends up in Davy Jones' Locker leaving the rest of the party goers to bring the guilty to the gallows. But first who is the murderer. Everyone is suspect! 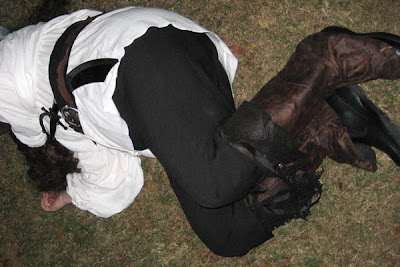 The lights go out and when they come back on my first mate, Merciless Morgan
is found with a knife in his back!

Is the culprit the profiteering pirate who is organizing a mutiny? Or, the saucy sea mistress who wanted more than a casual commitment? The perpetrator could be the swashbuckling swordsman desperate to win the love of the governor's daughter, or possibly the treasure seeking seaperson who's incapable of sharing. One thing is for sure, this party is filled with backstabbers and buccaneers looking to get ahead. There is little reward for honesty and a high price to pay for deceit.

Yo-ho-ho, get to work and discover who's the murderer. Someone will walk the plank before this night is out!

Take another look at these miscreants. Any one of these scoundrels and knaves is capable of this evil deed.

Is it this one? 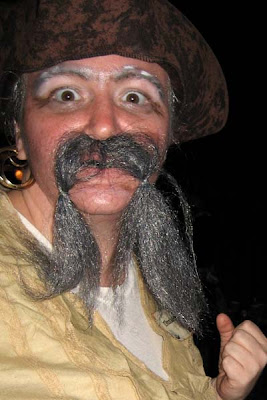 Or maybe this salty dog? 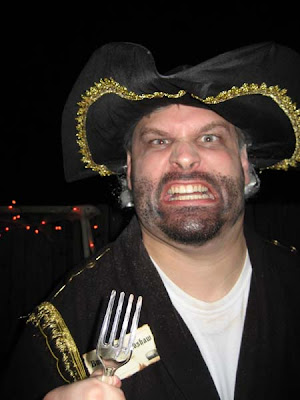 I think this one is trying too hard to maintain his innocence. What do you think, could he be the guilty one? 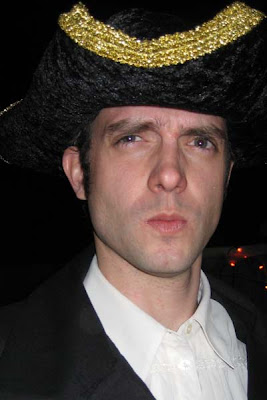 Maybe the Governor did it! 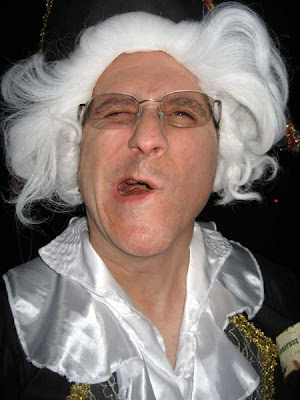 Or maybe his fair lady! 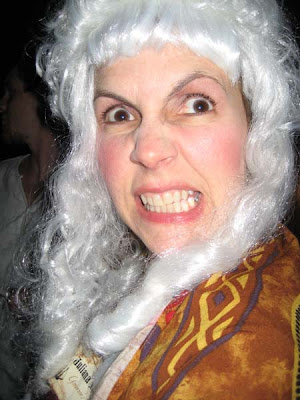 Perhaps these two are in cahoots! 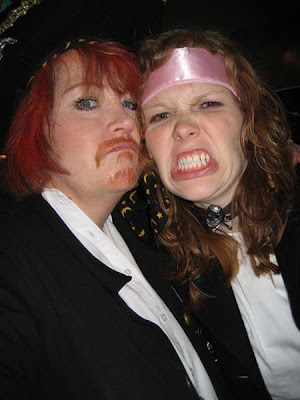 Don't be fooled by the look of these rascals. They are armed and dangerous. 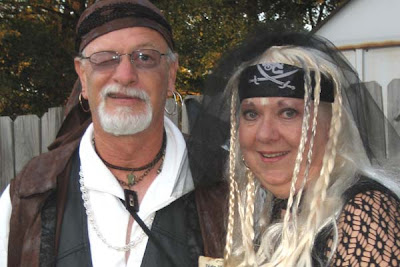 Discuss it among yourselves and we'll take a vote. Information can be brought for a price. Get your doubloons out mates. 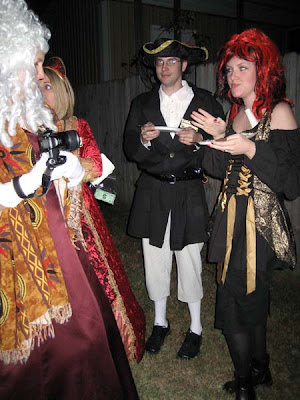 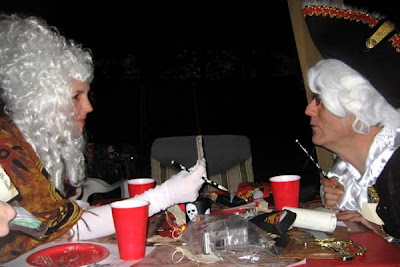 Mystery solved! It was Sealegs Sam, who I don't even have a picture of....we were in such a hurry to keelhaul him and then make him walk the plank. I'm afraid there isn't a bead or button left of him....since he was thrown into the shark infested waters of the harbor. 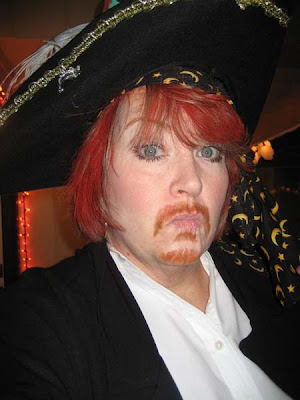 Beware if you come to Port Royal with mayhem in mind...
justice is swift and savage in these parts! 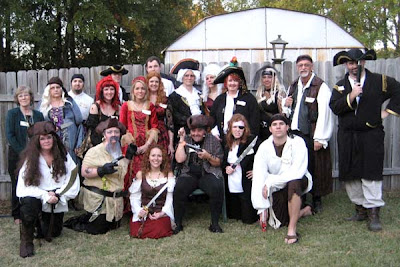 the colors, the people and the stuff that brighten my world