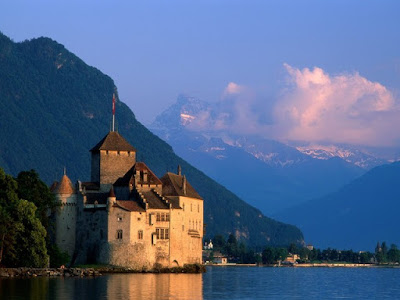 Located on the shores of Lac Leman (Lake Geneva) in Montreux, Switzerland, the rock on which Chateau de Chillon is built has been occupied since the Bronze Age. The islet fortress was held first by the Bishops of Sion and later by the Counts of Savoy from the beginning of the 12th century. Those who controlled the castle also controlled the access by travellers from Italy north into what is modern day Switzerland. The castle was captured in 1536 by the Swiss . In 1798 it became the property of the Canton of Vaud. Restoration work began at the end of the 19th century.

In 1816 Lord Byron and his friend Percy Shelley were sailing on Lac Leman (the French name for Lake Geneva) when they stopped to tour Chateau de Chillon. After walking through the dungeon Byron was inspired to write his sonnet, "The Prisoner of Chillon" chronicling the imprisonment of a Genovois monk, Francois de Bonivard from 1530 to 1536. Bonivard, the Prior of St. Victor's, Geneva, was chained to the in the dungeon of the fortress because he spoke out in favor of the Reformation and the independence of Geneva. 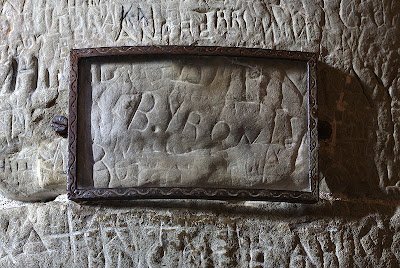 Bryon carved his name into a dungeon pillar.

My hair is grey, but not with years, Nor grew it white In a single night, As men's have grown from sudden fears: My limbs are bow'd, though not with toil, But rusted with a vile repose, For they have been a dungeon's spoil, And mine has been the fate of those To whom the goodly earth and air Are bann'd, and barr'd-forbidden fare; But this was for my father's faith I suffer'd chains and courted death; That father perish'd at the stake For tenets he would not forsake;

You can read the entire poem here. 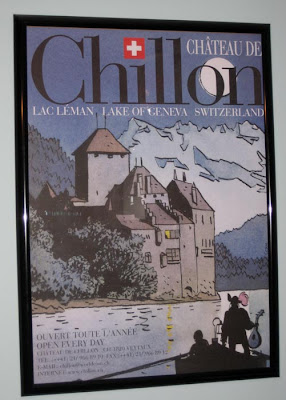 my poster
Posted by steviewren at 6:26 AM