It's time again for Postcard Friendship Friday. And in the name of friendship, I am inviting all my bloggy friends to take a tour of my hometown via postcard images. 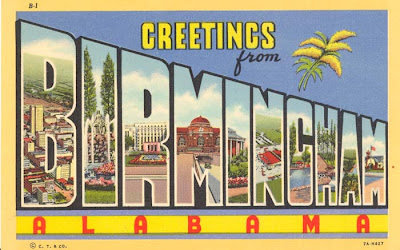 Birmingham, was established in 1871, but Arlington antebellum home was built in the 1840s by one of the future founders of the city. It is located in Old Elyton, the first county seat of the area. The city of Birmingham quickly grew and encompassed the home. Today it is located in the middle of a long established neighborhood. Every Christmas the home is decorated according to the style in it's hay day. Tea and cookies are served by costumed women and attendees are invited to tour the home. 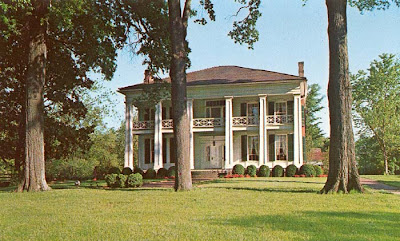 Birmingham's Byzantine inspired Beaux-Arts Terminal Station was the terminus for eight railway lines that came from and went to all sections of the United States. The station was built in 1909 and torn down in 1969 much to the continuing chagrin of historical preservationists. I vaguely remember going there. I mostly remember that it was huge and cavernous. In my mind's eye I see dust motes floating down from a high ceiling. I also remember going out onto the platform and seeing many different sets of tracks. I don't remember why we were there or when though. Too bad it's gone. The people who really remember say it was beautiful. 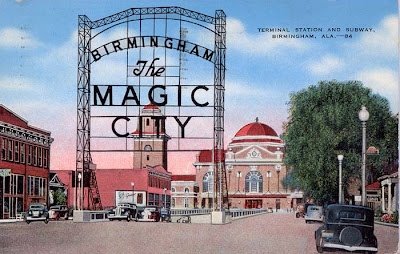 By the way, the city is nicknamed The Magic City because of the phenomenal pace of growth in its early years. 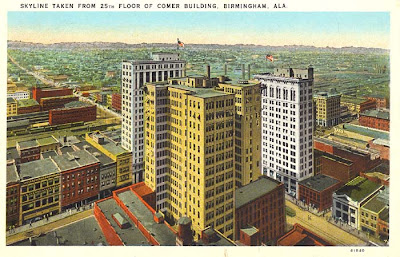 If you look you can find a post or two with a couple of pictures taken in front of this municipal building last year when I had jury duty. 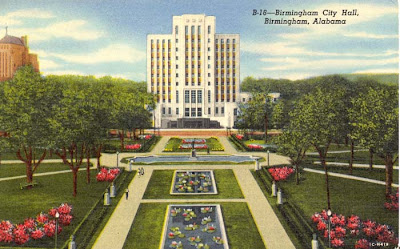 The city is known for its steel industry. This next postcard is of T.C.I, Tennessee Coal and Iron Co. which later became U.S. Steel. This particular plant was close to my childhood home. In the years before the Clean Air Act it was not unusual for us to have to sweep coal dust from our front porch every morning. Many of my friend's fathers worked here. My own father retired from a cast iron company. 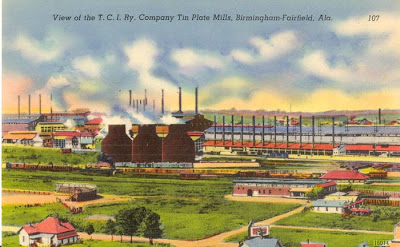 My family belonged to this church from the time I turned six until I was in high school. Later my two oldest sons would attend private school here for three years. We lived close by and they walked or skated to school. My middle son still tells the story of getting in trouble for skating through the church over to the school side one morning....only it wasn't him that did it. It was his older brother.

For many years I was plagued by a recurring dream about the steps in front of the church. I always dreamed that I had tripped and fallen and couldn't get up (before the commercial "I've fallen and can't get up" days). Everyone on the way into church was always frozen in place and starring at me sprawled on the steps. 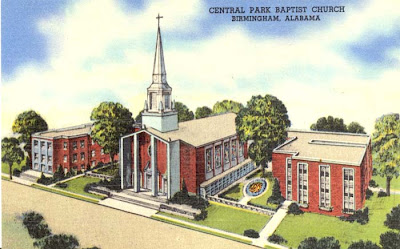 This is the high school I attended, as well as where my mother and father went. It was built in 1908 and closed in 2006. It was a three story building with a courtyard in the center. I spent some happy days inside its halls. I meet my ex husband there and received my high school diploma in the gym. 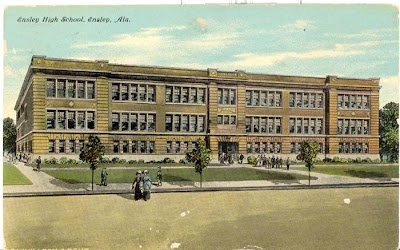 I've written about this Chinese restaurant on the blog before as well. My family went here many times. My ex husband proposed to me here. We took our oldest children here before Joy Young's closed its downtown location in the 70s. 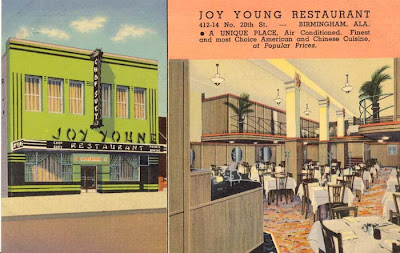 The Alabama theater is known as the Showplace of the South. My daddy worked here as an usher when he was a teenager. They wore white uniforms and gloves. It fell into disrepair and almost went the way of the Terminal Station, but forward thinking citizens banded together and began restoring the theater in the 80s. Today it is the venue for many theatrical performances and concerts. Old movies are shown here on a regular basis as well. 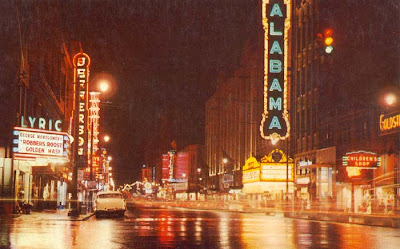 Birmingham is the home to many beautiful churches. St. Paul's Catholic Church is located downtown. I love the twin spires. About 10 years ago a modern building went up a block away. The new structure sports twin spires as well which can clearly be seen from the expressway. Whenever I drive by I always strain my eyes to catch sight of those four spires, the two modern and the two old ones. 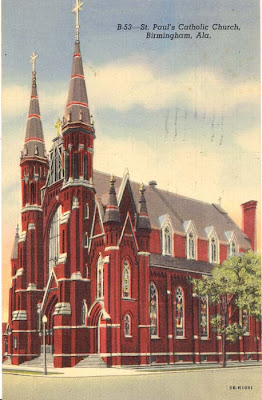 And lastly, no tour of my hometown would be complete without this sight....Vulcan, the world's largest cast iron statue. He stands atop Red Mountain and towers over the city from his perch above us all. In fact, hometown author Anne George made him famous by referring to him in her Southern Sisters mystery novels as the "moon over Homewood" since his naked backside faces the city of the same name. You might like to give her "Murder on a Bad Hair Day" or "Murder Boogies with Elvis" or "Murder Runs in the Family" a read sometime. Just don't believe everything she says about our hometown. 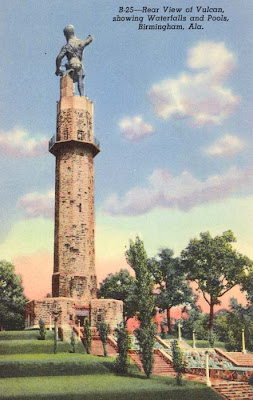 Thanks for taking my vintage postcard hometown tour!
Posted by steviewren at 8:58 PM