Has the start of school always made children this overjoyed? 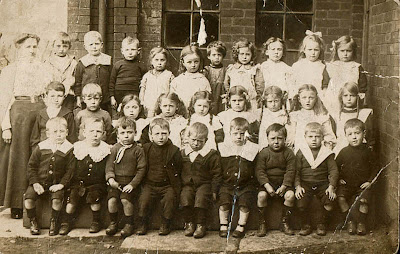 I have some class pictures that look just like this.

Besides new shoes and school supplies, what do you remember about the start of school each year? I remember the first grade teacher, Mrs. DeShazo, who demanded that we color in the pictures as hard as we could and there better not be any flicks of crayon sticking up on the paper anywhere. (I think she must have had a serious problem)

I remember Danny Gibbs in the second grade. He like to pretend to El Kabong me....anybody but me remember the Quick Draw MrGraw cartoons?

Fourth found me in Mrs. Down's class. She was fairly nice. Nothing amiss to report about her. My best class picture EVER was taken when I was in the fourth.

In fifth grade I got my first up close and personal taste of mortality. A boy everyone liked died in a car wreck that year.

In the sixth grade I had my first male teacher, Mr Sheetz. I drew caricatures of him and we passed them around the room. I never got caught. I drew him about a month ago, just to see if I still could.

In seventh grade, my girlfriend and I became fans of the original Star Trek television show. We even wrote our own episode of the show...Mr. Spock falls in love.

In the eight grade, I was finally one of the seniors in our elementary school. I had been looking up to them for seven years. It was about time.
Posted by steviewren at 11:16 PM