According to Wikipedia, Cabinet Cards were "the style of photograph which was universally adopted for photographic portraiture in 1870. It consisted of a thin photograph that was generally mounted on cards measuring 4 ¼” by 6 ½ inches."
I don't know if these two postcards would be considered true Cabinet cards, but I am going to assume so unless one of you card experts can shed light on their probable origin. I acquired them in a lot of cards that I purchased off Ebay. These are two of my favorites. 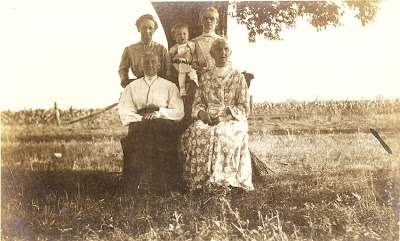 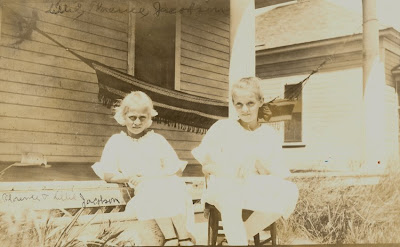 There is no postmark or message on the back which would give a clue as to their age. So I'm giving it my best guess and dating them using my superior powers of deductive reasoning and my vast knowledge of costumes and clothing of the 19th and 20th centuries. The one I'm titling "Generations" seems to be from the late 1800. The "Sisters" might have been taken between 1900 and 1910. I read both cards as Midwestern in origin. Maybe Kansas. Maybe Oklahoma. Possibly Wisconsin. These women and girls are strong, determined, forged out of hardship and experts in making do with what is at hand.

The ladies in "Generations" look a bit surprised that anyone would want a photograph of them. The photographer better hurry and get their picture. They can't sit under this tree all day...they've still got tomatoes to can and peas to snap before the sun goes down! 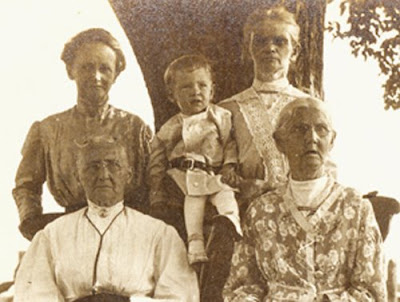 The girls in "Sisters" seem to be used to lounging on their porch steps watching whatever or whoever passes by. They make judgments and giggle behind their hands as they whisper secrets about those who intrude on their privacy. 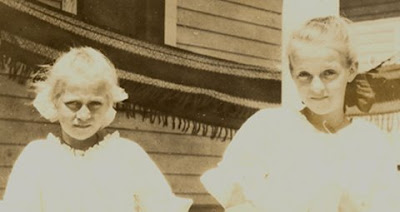 Lillie and Florence Jacobson
Perseverance
We must not hope to be mowers,
And to gather the ripe gold ears,
Unless we have first been sowers
And watered the furrows with tears.

It is not just as we take it,
This mystical world of ours,
Life's field will yield as we make it
A harvest of thorns or of flowers.

All in all, I think what their faces say to me is that "we will persevere, we will abide and we will abound."
Posted by steviewren at 10:23 PM