Okay, first of all I hope everyone knows I was just kidding about doing a series on Fission and Fusion: Contrasting Home and Office Implements as Metaphors in the Pursuit of Relational Understanding . I was making fun of classroom art critiques. My personal thought has always been that while constructive criticism is very helpful, spouting artsy fartsy b**l s**t meant to impress instructors with my dedication to "My ART" is just silly.

Besides the fact that I loved the discipline of art classes, the camaraderie of being with fellow artists and the numerous challenges to stretch beyond what I was comfortable doing, my next favorite part of art instruction classes was the critiques. I absolutely loved coming up with the most random, the most ridiculous narrative to describe the meaning I had assigned to my work....and to see that I impressed the instructor with my dribble was the reward.

Case in point: We were given the assignment in a 3-D class of taking an ordinary useful object and altering it in a way that caused it to lose its usefulness and so that it was changed into an art object. These assignments drove me crazy. How do you do that? Well, this is what I did. I took a feather duster mounted it in a 4X4 block of wood so that the duster was pointed upward at a 75 degree angle. Pounded the block to age it. Drove spikes into it. Glued shells to it. Draped and wrapped wire around it. Added a big pearl earring, more feathers and some beads to the wire.

Okay, now I at least had something to take to class, but I knew that wasn't enough. On the way to school. it came to me....my artistic narrative for this project. When it was my turn to defend my piece I would tell the instructor that it was a "Dust Fetish" meant to represent an ancient South Seas talisman. The beads and pearls showed its great worth. The feathers were symbolic of the natural world. The nails and stakes were there to represent a modern element. The wire encircled and encased it all, joining all the elements to the whole. The fetish was revered for the value the owner's assigned to it in keeping their dwellings clean as well as disease free.....okay...see what I mean.....how could making up this bs and thereby getting an A for turning in a glorified feather duster not be fun! I really did get the A. And today the Dust Fetish sits atop my computer desk proudly keeping dust off my keyboard and making sure that I am in perfect health!

Many years ago I took watercolor classes from a local artist whose work is known nationwide. He would sometimes bring his work in progress to class. At that particular time he was doing a series on Washington D.C. He brought in a painting of a old black woman and her grandson who were looking at portraits of past presidents in the National Gallery. The two figures were standing before the portrait of Abraham Lincoln. I asked him what the meaning behind the painting was. I expected him to give me some profound meaning. You know what he said???? I've never forgotten it. Not that he was attempting to represent the grandmother as passing on some kind of history of oppressed black people in America to her young grandson....no he said that he just liked her crocheted hat. I've never forgotten his very truthful answer. I don't know about most artists, but I expect their motivation for the pieces they do is closer to his honest answer than any more convoluted meanings. I bet they just want to paint the crocheted hat too.

I sketched some today, but nothing really worked out. In an effort for full disclosure and truefulness, I am showing you my mess-ups.

I could never get the shape of the lemon right. One of the guy's legs is too short. The big toe on the foot is way too big. I almost always draw with a pen rather than a pencil. It helps me not worry so much about getting everything perfect. I don't tend to overwork things as much. But if you make a big mistake, you can't fix it either. 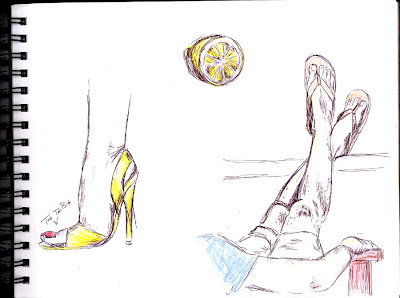 Next I tried to draw this woman lying on the floor with her hips and legs twisted. Not so good. She looks deformed. I'll need to try this one again. 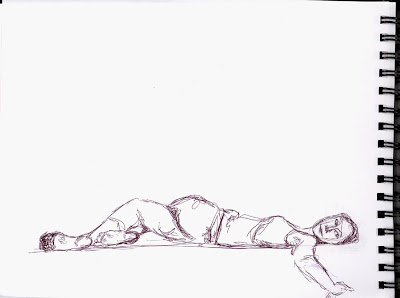 So I turned the page and drew another woman exercising. Her arms are way too long and her legs are the legs of a child. 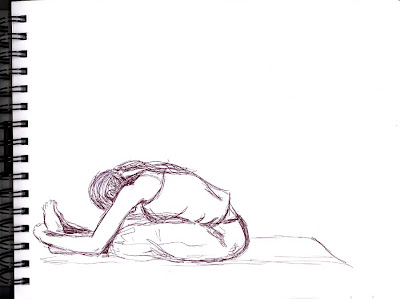 But I didn't give up, I moved on to drawing these two little girls. I like this one, better but their forms aren't right either. Their shoulders look all hunched up. They're too tense. They need to do some exercises and limber up, don't ya think? 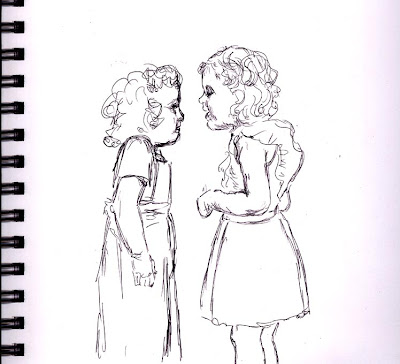 Finally I drew these girls with fairy wings. I think I like it the best. 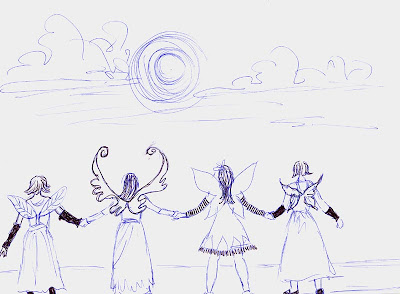 I took all of my subjects from the pages of 'Real' and 'How' magazines.
Posted by steviewren at 10:20 PM