Friday: I stopped at Anthropologie on my way home from work. I love their design aesthetic. Actually, I salivate over their design aesthetic. I want to fill my house with their furniture and tsotchkes. Unfortunately, I either can't afford or can't justify spending so much on anything I don't really need....unless it's on sale. And these sweet salt and pepper shakers were on sale. And now they're mine. 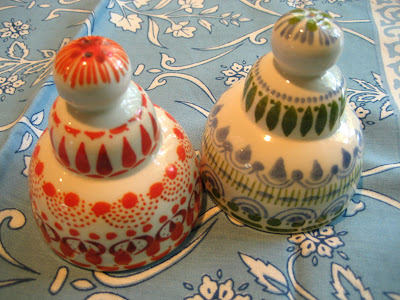 Don't you think they look kind of like these? 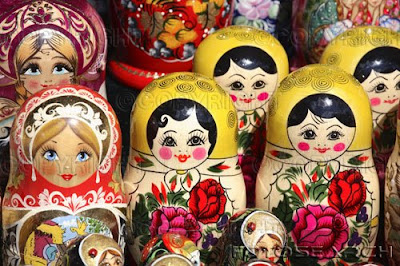 I love to wander around the store taking note of how they arrange this and market that. The way they match this textile with that fabric. And while I was busy googly eyeing everything in the store I noticed the window displays....at first they looked like vintage wooden scroll work from a antique salvage company....then I realized they made their own scrolly swirly sculptures from cut up vintage books. How clever are they? Who thinks up this stuff? Can I take lessons?
Anyway, I found a blog that has a couple of photos she took of the same thing in a Anthro in Lousiana....her photos will give you the idea but you really need to see the whole window to get the big picture. You can see her photos here.

Side note: Alabama has reverted to summertime temperatures.

Pros: The art show had lots of good art. A local High School jazz band played some pretty good tunes. I went with a good friend, so the company was great. We got a pretty decent start to the day (I am known for not getting up and out of the house before 3 pm on Saturdays).

Cons: Everyone else and their brother also got a good start to the day. The crowds were gynormous. It was hot as Hades. I started to sweat almost as soon as we arrived. I hate to sweat, especially when it is supposed to be a crisp and invigorating temperature outside. I had no money to purchase anything I saw. Because of the crowds it was hard to amble from booth to booth to take in all the work. I remembered why it's been more than a few years since I've gone to this show. (Why, oh why does anyone in the South plan outdoor festivals in the heat? Why, oh why does anyone think it will be cool in October?) 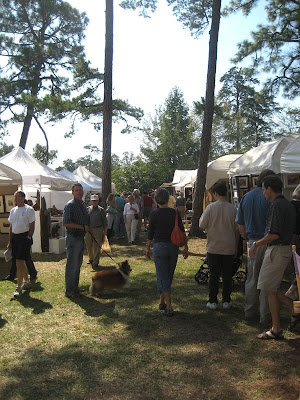 This picture does nothing to back up my complaints.
It doesn't look too crowded, hot or miserable, but it was! 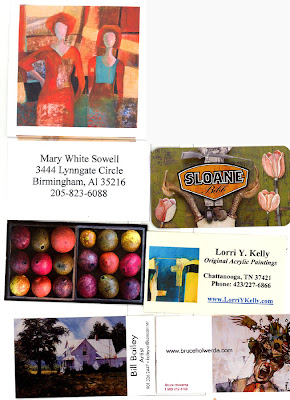 Don't ask me why I snatched up these business cards and flyers,
I won't be able to afford anything later either.

I can't show you an image of my favorite painter because I was too shy to ask him if he minded if I took a picture. Suffice it to say, if I had $800 I would own one of his pieces today. Actually, I would have owned one last week too, because he had one I coveted the last time I went to this show also.

My next to most favorite was this guy's stuff. (Don't ask me why I had enough courage to ask if I could photograph his work. I know it doesn't make sense, does it?) 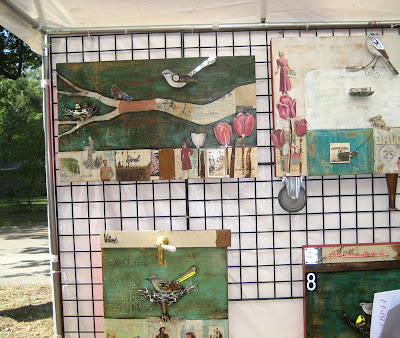 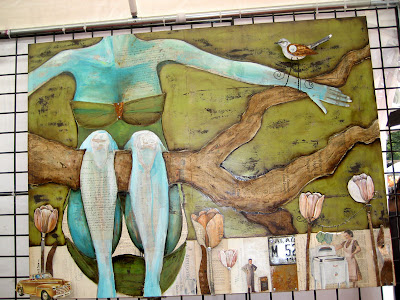 I don't know the name of this piece, but I would name it "Out On A Limb." 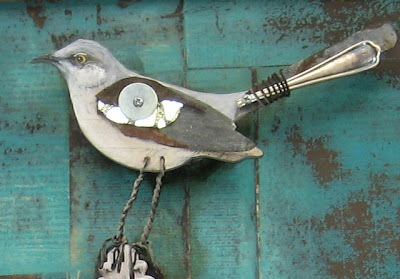 Here's another reason not to love outdoor festivals. 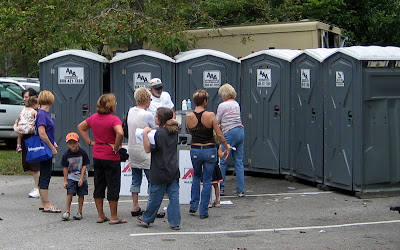 I can wait, thank you very much.

All complaining aside, we really did have fun. We left the park and went to California Pizza Kitchen for lunch. I ordered the Thai Crunch Salad. OMGosh, it was delicious. 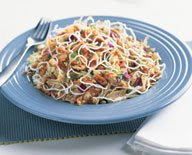 I added the avocado to it. Mmmmmmmmmm! So fresh and crunchy in your mouth.

Sunday: Last weekend I said I planned to try Rebecca's recipe for Pumpkin Bread, but I wasn't able to because I didn't have any flour. I bought the flour yesterday and this morning I decided to try again. Only I didn't really want to use 3 cups of sugar (trying to cut down) and I thought pumpkin muffins might be easier to snatch and run for weekday breakfasts so.....I decided to be creative and combine some recipes.

I grabbed Betty Crocker off the shelf and started experimenting/mixing. 1/3 cup of sugar instead of 3 cups, 2 eggs instead of 1 for more protein, the whole can of pumpkin rather than the 1/2 cup Betty reccomends cause it's good for ya, a spoonful of apple butter in the center of each for extra sweetening, pecans for protein, a little less milk and oil to off-set the extra pumpkin. 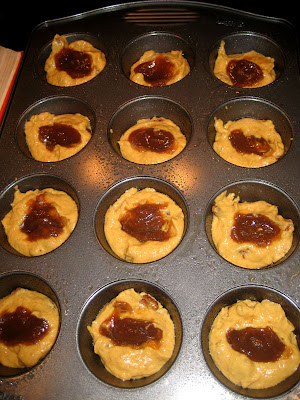 Hot and fresh out of the oven. Butter makes everything better as Paula Dean would agree. 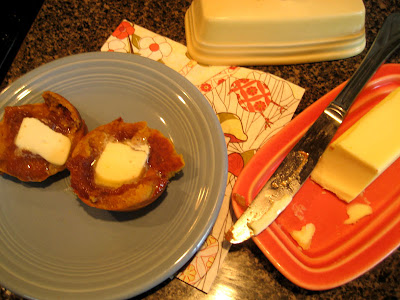 But, I don't suggest trying my recipe at home....or at least don't call them muffins...there isn't anything light and airy or cake-ish about them....maybe they could be called oven puddings....but hey they still tasted good! I'm not one to let food go to waste. And I was very hungry!

I fell down on my resolution to make a drawing or piece of art a day yesterday. By the time I got home I was pooped. So this morning while the "puddings" were cooking I sat down and worked on today's art offering. 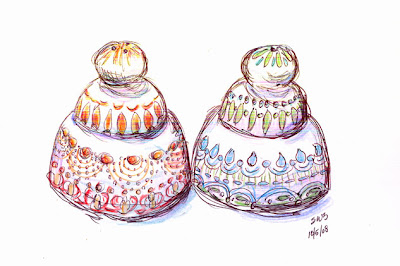 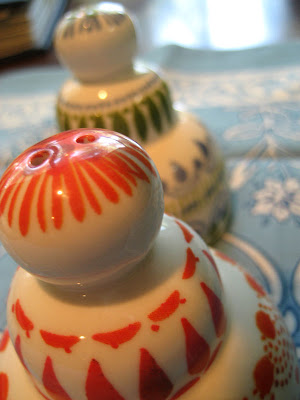