They May Be Wiser, But They Sure Aren't Happier

Horrible true story....sad, but true. Today my daughter, who teaches Special Ed to 1st through 3rd grades, was trying to help some students understand their writing assignment a little better. Their teacher wanted them to write a paragraph about a fictional character. But these third graders couldn't quite grasp the concept of fictional. Attempting to make the meaning clear she said, "Fictional means someone who isn't real, like Santa."

Immediately she realized she had made a huge mistake when all four little boys cried out "What? What do you mean Santa isn't real?" Rachel tried to backpedal, but once a child begins to doubt...well we've all been there. She said they were really distraught. It seems their teacher had made the same mistake. It's hard not to question who Santa really is after two adults have made the same slip.

She feels bad. She says she never thought that they would still believe, they seem so old in other ways. Maybe they will make it through this Christmas with their illusions of magical things still intact. I hope so. Children grow up so fast. No need to rush it. 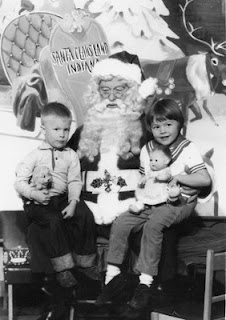 Courtesy of Google Images
Posted by steviewren at 11:42 PM