Eventually, I found my identity in a question asked by the oldest.  She, younger sister and parents were on their way to my home. When the girls were told they where they were going, the oldest asked a question to clarify which grandparent's home (they have lots of g-parents, step g-parents and great grandparents, so it can be confusing).  Her question was this, "You mean the crafty grandmother's house?"

The past week before my recent trip to Texas, I busied myself making bunting and dolls to take with me. 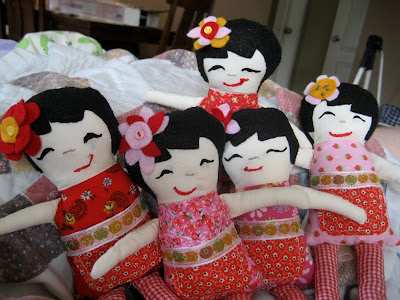 These are the Wu sisters. They are Chinese adopted babies. Their names are Wu Li, Wu Su, Wu Lui, Wu Gee and Wu Nu. I used the same pattern I used when making dolls with their two Alabama cousins. The idea for the doll's nationality came from something one of the TX grands told Rachel and I earlier this summer. When asked how many babies she was going to have she told us none....she was going to adopt Chinese baby girls instead. 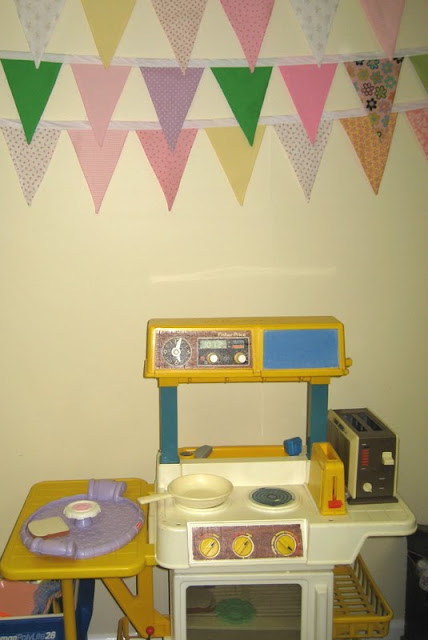 After going through my years old stash of fabric a few weeks ago, I remembered a project that I'd seen on Etsy and wanted to make.  I realized that many of the fabrics that I had in the give away bags would be perfect.  I went to work cutting out triangles and sewing them together with quilter's binding.  Easy peasy!  I hung them on the wall above Rachel's old Fisher Price kitchen set. (It came down from the attic when grandchild #1 was a toddler and has been a favorite play toy at my house ever since) to take photos. I have plans and dozens of triangles of fabric ready to make a set of bunting for every grandchild's bedroom.

After telling them a story about their favorite made-up heroine, Anna Louise Spotty,  the girls decided to put on a circus for their parents. It was hilarious to see how they worked out costuming issues fashioning them out of things around the house. EG is a clown. She is wearing a puppy purse on her head for her wig. I quickly made the nose from a red pom pom and the stretchy black stuff that I made MK's ringmaster hat from. They both are wearing Daddy's clothing.  The bunting was hung in the dining room archway with a  push-pin. They assured me they would get Daddy to film the production and send it to me when they are ready to put on their circus.

Yep, crafty Gramma is the perfect title for me. I feel perfectly capable knowing I have lots of crafting know-how to pass along to each of them. It doesn't hurt that I also have the equivalent of a craft store of supplies in my basement.
Posted by steviewren at 12:48 PM