We used to have a customer at work named DeAntoinette Best. She liked to use "de Best" as her signature. Corny, I know. But I was lucky enough to see the real "da Best" yesterday.

I went to see the Leonardo da Vinci drawings, which are on loan presently at the Birmingham Museum of Art, from the Biblioteca Reale in Turin, Italy. This is the first time these drawings have ever been seen outside of Italy. As you entered you were given a magnifying glass so that you could carefully scrutinize each drawing. Wonder and admiration were almost palpable in the room as spectators took their turns at up close and personal observation. The words amazing and genius were heard repeatedly.

Although it seemed there were more, the exhibition was composed of only 11 drawings and one of the artist's notebooks, the Codex on the Flight of Birds. There was ample explanation of drawing techniques and drawing implements of the time period, as well as the history behind each piece. 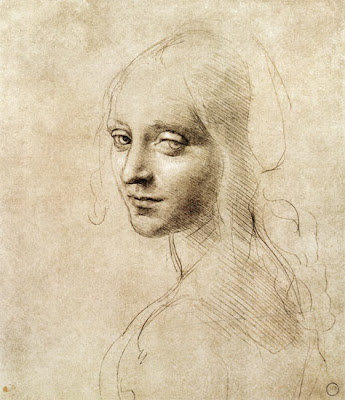 This study, done for the angel in the painting, Madonna of the Rocks, was rendered almost perfectly. Looking through the magnifying glass only revealed a few places where da Vinci corrected his first mark. This piece was done using the metal point technique, which is drawing with a wire or stylus on specially prepared parchment. The was drawing virtually perfectly, with no mistakes. 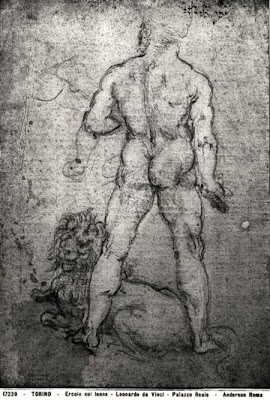 This sketch of Hercules and the Nemean Lion is believed to be a preliminary sketch for
a sculpture that he may have been planning. It was drawn using chalk or charcoal. 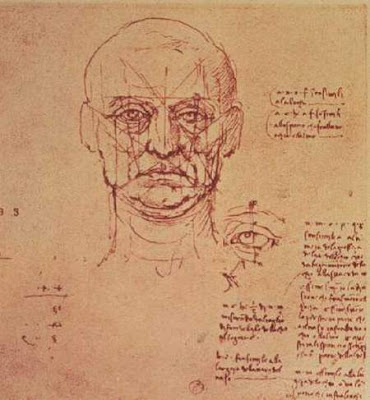 The Codex on the Flight of Birds was encased in a climate controlled case, as were all of the drawings. It was opened so that the viewer could see a double page spread. In it da Vinci recorded his research on the mechanisms of birds in flight and his extrapolations from this information as to how a flying machine could be built. As part of the exhibit, there was a video animation of the Codex which transformed da Vinci's ideas into 3-D moving examples of the information he learned through his observation.

I can't tell you the awe I personally felt at being so fortunate as to be able to see these works of the master. There may never be another person who leaves the world such a magnificent body of work again as Leonardo da Vinci. I've seen the Mona Lisa and the Madonna of the Rocks in the Louvre, but these humble drawings, these simple studies were more profoundly moving to me than those two beautiful finished works of art. I don't know why. Maybe their simplicity makes it all the easier to see his genius. And genius he was.


ps I couldn't possibly post the sketch that I drew yesterday after this post. But for the record, I did draw.
Posted by steviewren at 9:59 AM