My uncle was sent to Europe in 1961 along with his Air National Guard unit during the Berlin Wall build up.

Skies over West Germany — In the wake of the Soviet Union's continued construction of the Berlin Wall which they started in August 1961, and a fear of possible conflict in Germany, on October 1st President John F. Kennedy mobilized selected reserve components units including elements of the Army and Air National Guard. To prove his determination to protect Germany along with the other NATO allies, he authorized the deployment of eleven Air Guard fighter squadrons to bases in Germany, France and Spain (a non-NATO ally). The first of these squadrons arrived in late October, less than a month after mobilization. By this date several, including Missouri's 110th and New Jersey's 141st tactical fighter squadrons, had their ground service personnel join them and they became fully operational. They soon began flying patrols along the border dividing East from West Germany. No Army Guard units were deployed overseas although two divisions and numerous non-divisional units were on active duty in the U.S. Fortunately, no war erupted and by the summer of 1962 all the Guard units were released from active duty."

His job was to develop the film taken by photographers in reconnaissance planes. In his collection are some interesting aerial shots of European landmarks. In addition, he took some really nice shots of Paris on a weekend trip there. 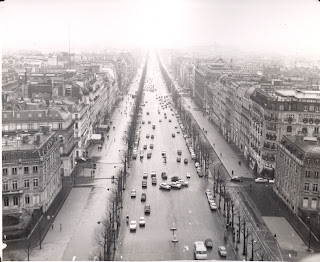 I especially like this picture of a street with the Eiffel Tower rising up through the fog in the background. 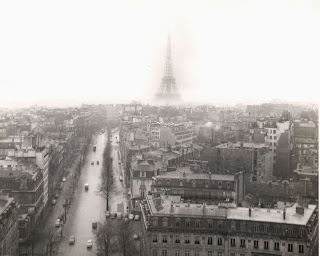 In 2002 I took this photo. This was taken in the final hour before nightfall. You can see the twinkle lights that light the tower in the dark. 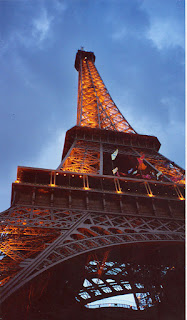 I mailed myself a letter from the post office in the Eiffel Tower (because I am a nerd). You can click on any image if you want to see it larger.

Here is a picture my uncle took of the Place de la Concorde. This is an Egyptian obelisk that was once at the entrance of the Luxor temple. 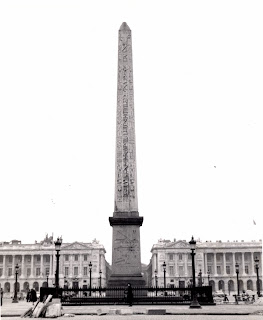 And here is a shot of the same spot. I took my photo from a moving tour bus. 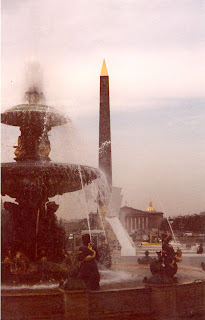 The black and white format used by my uncle adds mystery and romance to these photos of Paris, don't you agree?
Posted by steviewren at 8:37 PM