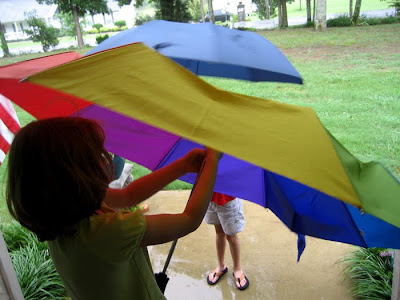 A while back, Betsy from My Five Men wrote this post about all the rain they've had in the Midwest this year. She ended her entry with a question that I've meant to research ever since then; "didn't they used to call them [umbrellas] bumbershoots?" I was familiar with the term but not with its origins.
Merriam Webster defines the word like this:

According to this article most people think bumbershoot is an British term for umbrella but the author makes a compelling argument that the origin of this curious word is American rather than British. He says that the word isn't British, since it isn't know in Britain at all. He speculates that people associate it with the English because it was used in a song lyric from Chitty Chitty Bang Bang which was set in England. The song was written by two Americans for the Disney film.

But even before Chitty Chitty Bang Bang, L. Frank Baum used the word in 1912 in his book, Sky Island.

“This umbrella has been in our family years, an’ years, an’ years. But it was tucked away up in our attic an’ no one ever used it ’cause it wasn’t pretty.” “Don’t blame ’em much,” remarked Cap’n Bill, gazing at it curiously. “It’s a pretty old-lookin’ bumbershoot.”

So, now you know!

Posted by steviewren at 1:13 PM