Sepia Saturday (with a little tint thrown in) 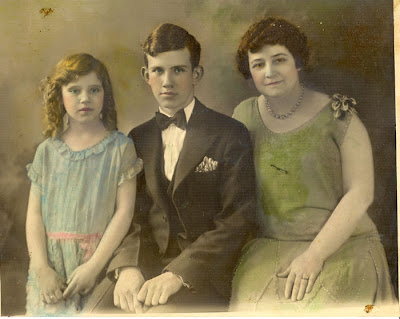 This photo is of my great aunt Belva and her children Vera Young and A. M. Yep, his name was A. M. and no, the initials didn't stand for anything. I've always wondered why anyone would name their child initials...what did they call him as a baby? His father's name was Albert Martin so I suppose he was named/initialed after his dad "Uncle Doctor." A. M. entered the navy when WWII broke out. His ship was torpedoed either leaving or shortly after it left New York harbor. He was among those that were never found. My uncles, who are all dead now, knew more of the specifics than my mother about this. She was a child at the time.

Aunt Belva died long before I was born, but "Aunt" Vera Young was a favorite visitor for us when I was growing up. She graduated from Auburn University and remained fiercely loyal to her alma mater all her life. In 1959, she moved from Alabama to Hawaii to become the home management and home furnishings specialist for the Cooperative Extension Service at the University of Hawaii in Honolulu.

It was fun and games whenever she returned home. Her visits usually lasted a month or more. Friends in Honolulu always gave her 5 to 10 orchid leis upon her departure. Upon her arrival at the Birmingham airport, she would take them off and put a lei around each of our necks and while greeting us with many Alohas. Aloha means hello as well as goodbye for those of you who didn't know. Many times she brought boxes of birds of paradise stems and orchids sprays as well. She also brought us exotic souvenirs and Hawaiian material to make dresses and shirts. I still have a couple of the hula dolls. Aunt Vera Young was a people person who loved to tell stories and be the center of attention, which we were glad to give her. I have many fond memories of her.