I know, I know, what in the world is she thinking of! Well, I titled the first part of my day today as "Black Mood Tuesday" (although it did wear off as the day progressed : ) so I may as well carry that thought to its conclusion tonight. So with that said, I give you these thoughts found on the tombstones of these famous departed folks.

Or what about...
A tomb now suffices for him whom the world was not enough
-Alexander the Great

When your life comes to its end maybe you would be interesting in being laid here along side the heart of Robert the Bruce. His heart was taken on crusade as a talisman, but only made it as far as Granada. It was returned to Scotland and laid it to rest here in Melrose Abbey instead.

Or perhaps you would rather be buried where the rest of Robert the Bruce lies...Dumfermline, Scotland. If you enlarge this picture you will see that King Robert the Bruce is carved out along the top of this church. 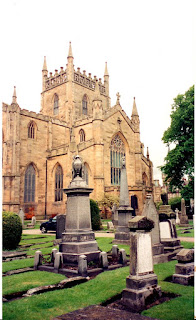 The cemetery where Samuel Taylor Coleridge is buried is quite beautiful. His remains rest here in Grasmere, England along with those of William Wordsworth and Beatrix Potter.


Stop, Christian passer-by:
Stop, child of God,
And read, with gentle breast.
Beneath this sod
A poet lies, or that which once
seem'd he--
O, lift one thought in prayer
for S. T. C.--
That he who many a year
with toil of breath
Found death in life, may here
find life in death:
Mercy for praise--to be
forgiven for fame--

He ask'd, and hoped
through Christ.
Do thou the same.

Legend has it that the Rock of Cashel is where Saint Patrick first used the shamrock to explain the concept of the holy Trinity to the Irish.

I'll end this somewhat macabre post with this very humble epitaph from the grave of Roy Rogers.

The Cowboy's Prayer
Oh Lord, I reckon I'm not much just by myself.
I fail to do a lot of things I ought to do.
But Lord, when trails are steep and passes high,
Help me to ride it straight the whole way through.
And when in the falling dusk I get the final call,
I do not care how many flowers they send--
Above all else the happiest trail would be
For You to say to me, "Let's ride, My friend."
Amen
Roy Rogers

Posted by steviewren at 8:29 PM