Of course I have a postcard collection. I have a gynormous collection of everything paper. Torn paper, scrapbook paper, calendars from 20 years ago, old greetings cards, magazines, any and all kinds of books, ticket stubs, Chinese fortunes, stamps and photos. Paper, paper, paper, I love it!

Since this is postcard week on my blog, I thought you might enjoy seeing some vintage postcards I have collected of my hometown.

This train station was the showplace of the city. The Beaux Arts Byzantine style building built in 1909, was torn down in 1969. By all accounts the building was beautiful, but by the late 60s it had fallen into disrepair. The protests of preservationists were dismissed and the building was demolished. 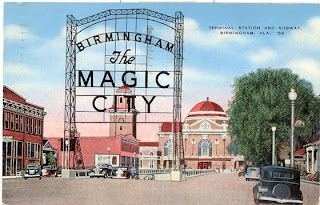 Here is an interior photograph I found in the Birmingham Public Library archives. 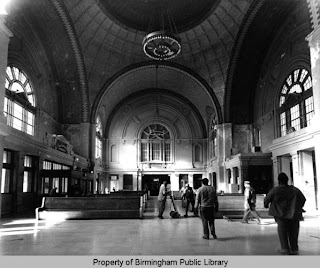 TCI or Tennessee Coal and Iron Railroad Co was located on the western side of town. The steel industry was a major employer and played a large part in the development of the city. This postcard is of the Fairfield Tin Plate Mill which later became known as U.S. Steel. This plant was not far from my childhood home. I remember sweeping black coal dust from our front porch each summer morning during childhood. This was before the strict anti-polluting laws went into effect in the 60s. 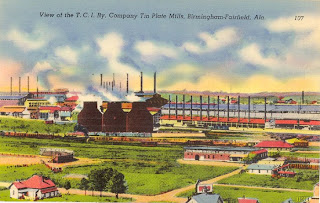 The Alabama Theater is called the Showplace of the South because of it ornate beauty. It was built in 1927 by Paramount Studios as a showcase for their films. The theater featured a Wurlitzer organ which rose out of the floor. "When the Alabama Theatre was built in 1927, films were silent and required a musical accompaniment. This was typically provided by an orchestra or theatre pipe organ. The Alabama's organ is a Crawford Special-Publix One Mighty Wurlitzer. Only 25 of this model of organ were built and the Alabama's is one of only three still installed in their original sites." In the 80s this theater would have gone the way of the terminal station except for the efforts of Birmingham Landmarks, Inc which started the process of restoring it to its former grandeur. Today, it is a venue for all types of entertainment including weekly showings of classic movies. This postcard seems to be from the late 50s or early 60s judging by the age of the cars in it. 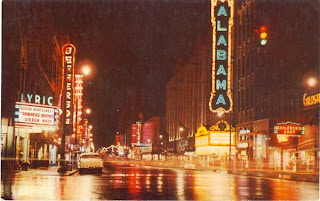 Here is an interior shot of the stage. Don't you agree, it is fabulous! Every time I go there I crane my neck to see all the ornamentation. Even the ladies room is worth checking out. 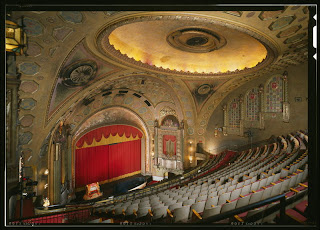 Here is a picture of the organ. Many times before the cartoons and feature films are played the organ will rise out of the stage floor and there will be a old fashioned sing along with the audience. 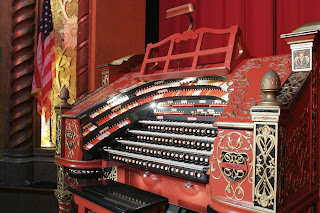 A trip to the Alabama is always a treat. If you ever visit my city, be sure to inquire about a tour of the theater. You won't be disappointed.
Posted by steviewren at 8:41 PM