Just a Couple of Random Things

It was pointed out to me, earlier this week, that my drivers license had expired at the end of June. So today I went down to the DMV to get it renewed.

This is me 4 years ago. It looks like the photo was taken in a criminal line up doesn't it? 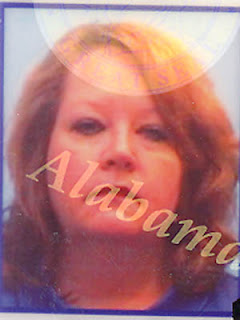 Oh my gosh, what a relief I don't look like a gun moll anymore! I got my haircut last week. I'm glad I decided to go shorter again. 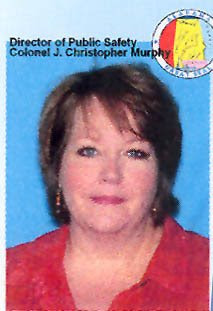 This afternoon I smashed my thumb in the safe at work. Ouch! That nail is a goner! It is throbbing tonight! 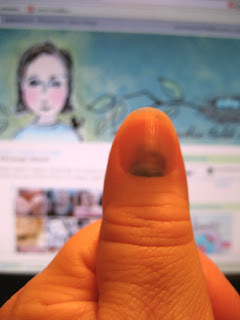 I have been looking for my tickets to the 1996 Atlanta Summer Olympics since sometime last week. I can't believe that I have lost them. I found the Olympic pins. I found the fans we got from Korean soccer fans. I found the pictures I took. But where the heck are the tickets?????

Anyway....this is how the story goes....Atlanta is only 2 hours and some odd minutes from where I live in Alabama. I begged my ex-husband to say yes to us entering the lottery for tickets to the opening ceremony and/or some other coveted events. I think the price for seats at the opening started at $450 each. But I reasoned it was a once in a lifetime opportunity. It would have been virtually our only expense in going except for gas to get there. We could have driven over and driven home the same night. No need to stay in a hotel or anything. Easy peasy. Nope, he wasn't interested. (for the life of me, I don't know why I didn't do it without him)

So we watched the opening ceremony from home...he had the audacity to say afterwards that he would have enjoyed that after all.....................aaaaaaaahhhhhh!

We did get tickets for one of the soccer games that were hosted here in our hometown. We saw Korea and South America play each other. Even though I'm not really a soccer fan I enjoyed being part of the whole Olympic experience.

But that wasn't enough for me. I needed to get to Atlanta to be in the middle of the whole shebang. My daughter in law (wife of oldest son) was game. Daughter and youngest son were game. Middle son arrived home from Papua New Guinea mission trip and I broached the subject with him...he was in. I had it all planned. We drove to the nearest park and ride MARTA (subway) station. Left the car there and took public transportation downtown. Walked to the nearest ticket booth. Inquired about available tickets. Randomly picked womens basketball at the Omni. Saw a completely unmemorable game. Walked to Olympic Park. Saw the water fountain. Saw where the Eric Robert Rudolph set off the bomb that killed 2 and wounded 111. (Rudolph later bombed an abortion clinic here in Birmingham) Bought pins, watched people, walked around until we were ready to drop, especially middle son who was still jet lagged. And came home, glad to have been a part of a historical event. I was finally happy. I had gotten myself there. 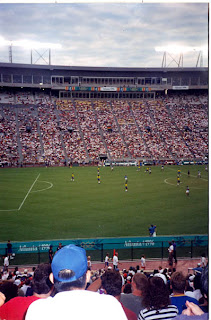 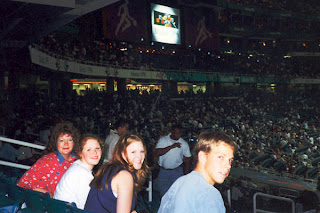 Middle son, daughter in law, daughter and me at the Omni in Atlanta, GA...guess youngest took this one 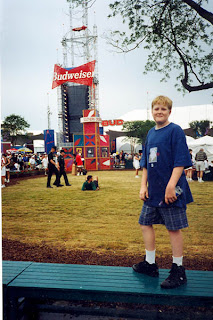 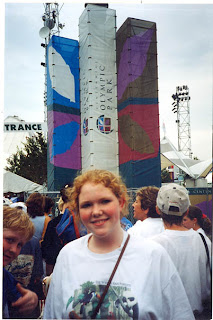 Daughter also at Olympic Park...hope she doesn't see this, she will kill me...not her best picture! 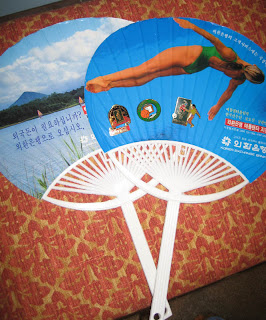 Better shot of pins
Please forgive the quality of these pictures. They were taken pre-digital, so I was unable to see how bad there were until after the fact. Then I was stuck with them.

This past Saturday, daughter and I drove over to Atlanta to shop at Ikea (I had a birthday gift card burning a hole in my pocket). While traffic inched though a downtown road resurfacing we took this not so great shot of the Olympic torch and rings outside of Turner Field which was rebuilt on the site of the Centennial Olympic Stadium. 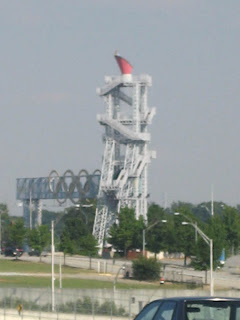 How about that Michael Phelps. He is amazing isn't he? Go Michael!
Posted by steviewren at 10:06 PM