My duty to do duty on jury duty is done. (what did she just say?)

As you probably surmised from the title, the case was dismissed. It was a civil case in which the plaintiff was asking for punitive damages involving an alleged incident at a convenience store. It happened in 2006 and neither side had any witnesses or evidence. I guess the judge decided there were no grounds for the case. So, its back to work for me tomorrow. There go all my beautiful lunch hour plans for the week.

I did get in my visit to the local Museum of Art. Like most other museums, I was not allowed to take flash photography inside. Since I am technically deficient and don't know the surefire never flash trick for my camera I only took a few pictures out in The Charles W. Ireland Sculpture Garden.

Looking out into the garden: 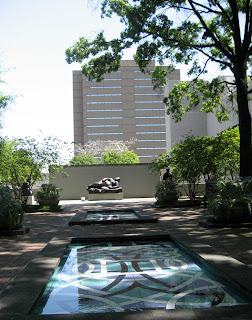 Head on a pedestal: 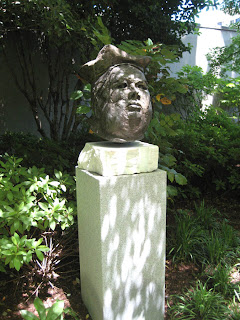 Looking back towards the museum: 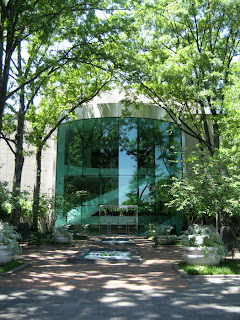 The only two exhibits I visited besides the garden were the Contemporary collection and the European collection. I wish I could share a photo of a huge contemporary painting entitled Bonjour Julie by Joan Mitchell that I liked, but I was unable to find an image online. I am especially drawn to the rooms where the 13th and 14th century icons, paintings and sculptures are displayed. I love the way this period of Italian art reflects the Byzantine style. In the rooms that contained the 17th century paintings I was fascinated by this painting:

The Allegory of Charles I of England and Henietta of France in a Vanitas Still Life by Simon Renard de Saint-Andre 1613-1677. 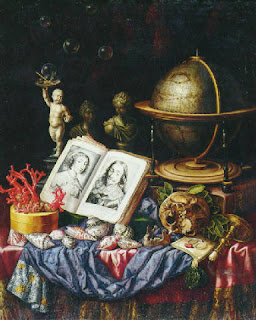 I copied this explanation from the painting description: "during the 17th century a form of still life called the vanitas developed as a means to impart an allegorical message about the inevitability of death. "

A vanitas painting, while possibly containing lovely objects, always included some reference to man's mortality - most often a human skull (with or without other bones), but also by way of burning candles, soap bubbles or decaying flowers. It was meant not only to be a work of art, but also to carry an important moral message: Trivial pleasures of life are abruptly and permanently wiped out by death, so don't get too carried away during your earthly time, Bub."

I played around some tonight and created my own allegory of the transient nature of life. 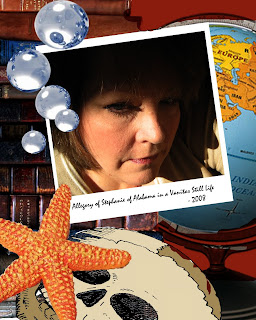 I know it can't be called art...how about FUN!
Posted by steviewren at 8:47 PM