Do you like to read books about food or cooking?

Some people collect cookbooks. Thumbing through recipes or making meal plans is a hobby for them. I cannot honestly say that I am one of these people although I do tear out the occasional recipe from a lady's magazine or print out one from the internet. I especially like the ones that someone else has recommended. Some of my favorite recipes have been torn from our local Wednesday Food Section of the paper.

I wish I had some of my grandmother's recipes. She made a delicious Orange Cake. She baked it in an angel food cake pan and when it came out of the oven she would drizzle a sugary glaze over it. Our whole family remembers it with the fondest of memories, but alas the recipe died with her. She made it from memory. I wonder if any of my cooking will be legendary in my children's minds after I am gone. 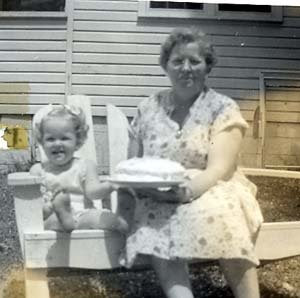 Me and Grandmother on my 1st Birthday
I did learn to make Chicken and Dumplings from Grandmother. These instructions weren't written down either. I stood beside her in the kitchen and watched her mix the ingredients, roll out the dough, drop the dumplings into the broth one by one, gentling swirling the pot to cover each dumpling as it floated in the savory broth. My grandmother has been gone for over 15 years now. By request of my youngest son, I prepared this dish as part of his birthday meal a couple of years ago. My daddy took one taste and asked me if this was his mother's recipe. I knew I had the recipe right. 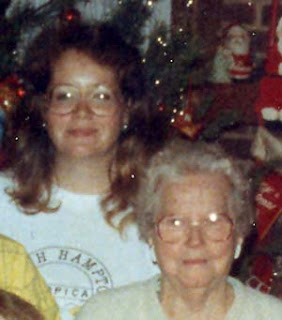 Me and Grandmother when she was about 80
Two Fat Ladies was my favorite cooking show from the first moment I laid eyes on those two motorcycle and sidecar riding ladies, Clarrisa Dickson Wright and Jennifer Paterson. What a hoot and what an education...pommes frites rather than french fries does sound ever so posh. And with all the butter and cream they used, well their dishes surely had to be tasty didn't they? I loved it that they served these meals to such diverse groups as the Scottish Fireman's Brigade and to the students of a boy's prep school. 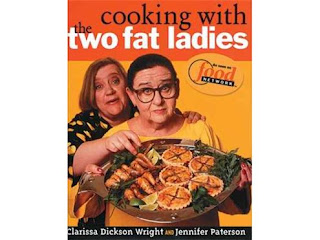 Have you ever wondered why a recipe might also be called a receipt? Well since this inquiring mind wanted to know, I looked it up.

Receipt is an old form that means the same as recipe. Both derive from Latin recipere, to receive or take. Receipt was first used in medieval English as a formula or prescription for a medicinal preparation (Chaucer is the first known user, in the Canterbury Tales of about 1386). The sense of “a written statement saying that money or goods have been received” only arrived at the beginning of the seventeenth century.
Recipe is the imperative, “take!”, from the same Latin verb. It was traditionally the first word in a prescription, heading the list of ingredients. This was often abbreviated to a letter R with a bar Recipe has been used alongside receipt since the eighteenth century in the sense of cookery instructions, gradually replacing it over time.
Hence Rx for a prescription. Cool.

I think we should use more culinary words and phrases in our everyday speech; like gustatory, epicurean, gourmand, gastronome, repast, provender, potable, having to eat one's own words, having an attitude like sour grapes, enjoying life with relish and gusto....

No one writes about food like Ruth Reichl. I first read her Tender At The Bone a number of years ago. This book is her semi-autobiographical ode to her love affair with food and her journey from her childhood kitchen to her work as the editor of Gourmet magazine. Her descriptive food vocabulary is so exact the reader almost tastes the dish along with her. She has since written Comfort Me With Apples and Garlic and Sapphires.

Like Water for Chocolate is another one of those books that melds food and fantasy with an almost invisible line connecting the two. While reading I felt myself being transported into the Mexican kitchen of her story so that I could chop chilies along with the other characters in the book.

Language and words are like food to me. Food for thought. Big bites of life. Flavor for a day to day world. Tasty experiences and savory memories. Mmmmmmm.
Posted by steviewren at 12:06 AM