Those of you who remember Twiggy will remember Mary Quant and Carnaby Street and this dress. 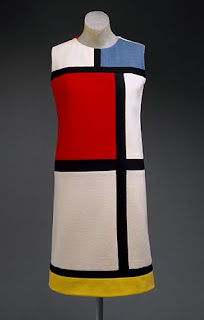 As the sack dress evolved in the 1960s into the modified form of the shift, Saint Laurent realized that the planarity of the dress was an ideal field for color blocks. Knowing the flat planes of the 1960s canvases achieved by contemporary artists in the lineage of Mondrian, Saint Laurent made the historical case for the artistic sensibility of his time. Yet he also demonstrated a feat of dressmaking, setting in each block of jersey, piecing in order to create the semblance of the Mondrian order and to accommodate the body imperceptibly by hiding all the shaping in the grid of seams.

Another designer, Mary Quant, took the credit for inventing the mini skirt and hot pants. Supposedly she named the short skirt length after her favorite car, the Mini. 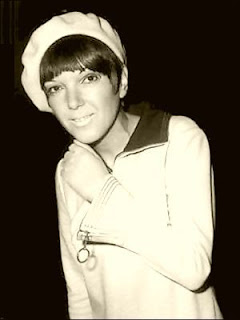 Skirts had been getting shorter since about 1958 – a development Quant considered to be practical and liberating, allowing women the ability to run for a bus. The miniskirt, for which she is arguably most famous, became one of the defining fashions of the 1960s. The miniskirt was developed separately by André Courrèges, and there is disagreement as to who came up with the idea first. Mary Quant named the miniskirt after her favorite make of car, the Mini, she loved this car so much, she had one designed especially for her.

In addition to the miniskirt, Mary Quant is often credited with inventing the colored and patterned tights that tended to accompany the garment, although these are also attributed to Cristobal Balenciaga. 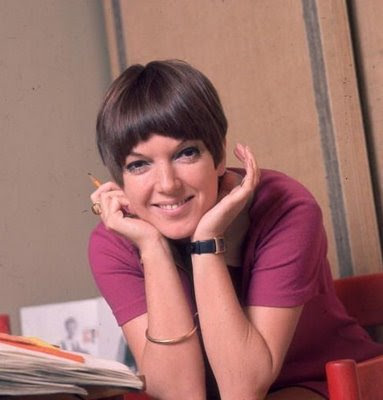 Quant started out as a boutique owner in 1955 on King's Row in London. For the opening of her store, Bazaar, she designed a pair of "mad house pyjamas" which were quickly grabbed by Harper's Bazaar for an editorial and then copied by an American manufacturer. This event convinced her that she should stock her shop with clothes made by herself. Although she had an art school background, she had no formal training in the fashion business. She experimented by mixing spots and checks, with balloon style dresses and with knicker bockers.

Her designs were simple and she wanted them to be accessible for the mass market.

Remember this big zipper? I had a couple of things that featured this oversized zipper.

Doesn't this dress make you think Mary Tyler Moore? It does me.

As her popularity grew as a designer, she created shiny plastic raincoats, pinafore dresses and patterned tights. She expanded into the wholesale market and began exporting to the USA. Her last fashion invention of the 60s were hot pants. She said in 1967, "Good taste is death. Vulgarity is life." 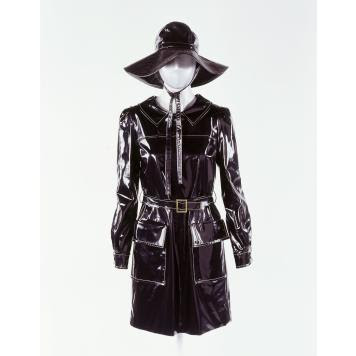 With all of this nostalgic looking back that I've been doing I've caught myself repeatedly humming "Mrs Brown, you've got a lovely daughter...." Thanks Herman and Mary for the memories!

Posted by steviewren at 6:12 AM