June 14th was officially established as National Flag Day in 1949, by an Act of Congress. This particular day was chosen to honor our flag because the 14th of June was the day the Stars and Stripes were adopted as the flag of the United States by the Second Continental Congress in 1777. In 1916, President Woodrow Wilson was the first President to officially issue a proclamation celebrating this date. 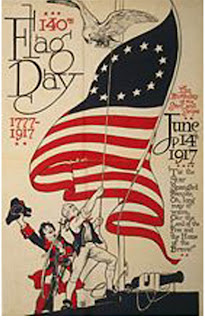 I pledge allegiance to
the flag of the United States of America
and to the Republic for which it stands,
one Nation under God,
Indivisible, with liberty and
Justice for all.

I celebrate this day for another reason too, since I was born 54 years ago today.

Posted by steviewren at 6:00 AM