Henry Sharpe Higginbotham(Shorpy) born November 23, 1896 died January 25, 1927; crushed by a rock in Bessie Mine, in Jefferson County, near Dora, AL. The short story of his short life can be read here, Shorpy, The 100-Year-Old Photo Blog.

Shorpy lived out his life not too many miles from my grandmother's oldest brother whose life was also cut short by a tragic mining accident. These two men were contemporaries, living on opposite sides of the same county in Alabama, most likely working down in their separate mines simultaneously.

Grandmother came from a big family of Scottish Irish God-fearing country stock. "Luster" was the pronunciation she always used when talking about her older brother. My great uncle, James Lester McCombs was 17 the day he and his younger brother Claude started walking to their jobs in a mine near Bradford, Alabama.

Later upon reflection, Claude said Lester seemed to have a bad feeling that day and was reluctant to go to work, trying unsuccessfully to talk Claude into playing hooky from work along with him. Thinking better of sloughing their responsibilities they both went on. Sometime later that day Lester was crushed by falling rocks. He was loaded onto the back of an old Model T truck and driven to the closest hospital which was miles away. He lived for a few hours but his internal injuries were too grave for him to survive. He died leaving behind eight grieving siblings as well as his mother and father. My grandmother told the story of her big brother's death with the a loving regret that never changed from the first time I heard her tell the story until the last. Last summer while attending a family reunion, I heard the only remaining member of that original sibling group tell the story of his brother's death all those years ago. Uncle J.L. told the same story almost word for word. James Lester(Luster) McCombs had never been forgotten by his brothers and sisters even after the passage of so many years. 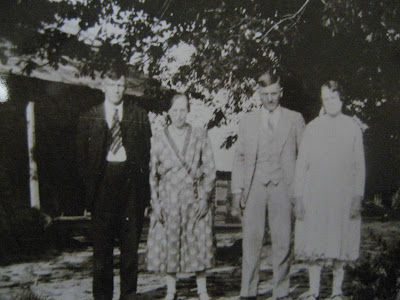 These were the parents of Lester McCombs, my great granddaddy Henry Issac McCombs
who I knew and my great grandmother Martha Jane who died when I was a baby.
( my great grandparents are on the left; his sister and her husband are on the right)
Posted by steviewren at 8:00 PM